Grammy-nominated frontman, Paul Rodgers, is a musical innovator who has successfully reinvented himself over the course of a five-decade career, in the legendary bands Bad Company, Free , The Firm, and his live touring collaboration, Queen + Paul Rodgers. Ranked as one of the Greatest Singers of All Time by Rolling Stone Magazine, Paul is a multi-faceted creative force in the genres of Rock, Blues and Classic Rock. His powerhouse delivery combined with his impeccable songwriting and peerless showmanship has produced over 125 million records sold and helped redefine Rock ’N’ Roll in the process.

Rodgers’ latest effort caps the 50 Year Anniversary of his first major band Free which is recognized as one of the biggest selling British Rock bands in history and has solidified the members as British Hard Rock Pioneers by Rolling Stone Magazine. “Free Spirit” Celebrating the Music of Free was recorded at a sold out show at The Royal Albert Hall in London. Captured in a stunning multi-camera shoot.

And now, set.fm and DiscLive had partnered to record the shows on the STARS ALIGN tour, and make recordings available each night via the set.fm app and via limited edition Laminates that include TWO free shows! Free classics such as “All Right Now”, “Wishing Well” and “Fire and Water” will make up the live concert recordings with many other deep cuts performed live such as “Love You So” and “Catch A Train”.

Don't wait to order your copy! Click the above image for the LAMINATE, or order your set below! 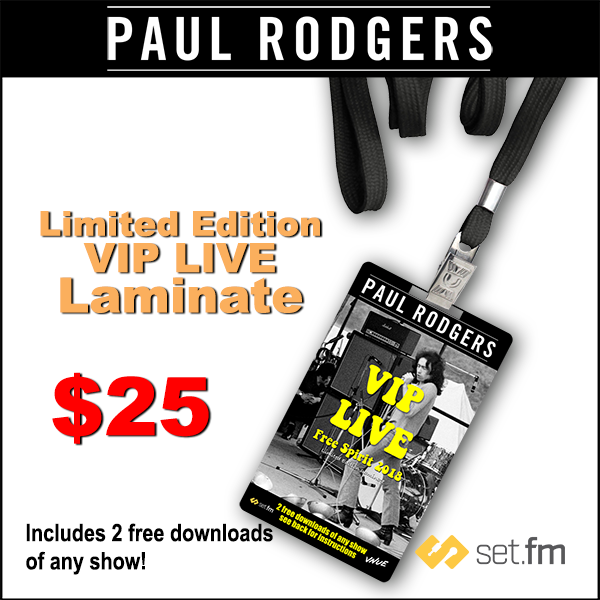